'We run a group at school as part of Amnesty International and were part of a campaign to raise funds and awareness to support the women in Afghanistan who are controlled under the laws and restrictions of the Taliban. Under these laws women are not allowed to have any relationship / watch / use / buy or create any form of art or music with a total lack of free speech and free thinking. They also order women to wear all black clothing and cover up their whole body without a choice - with the consequence of being killed or imprisoned if they disobey. 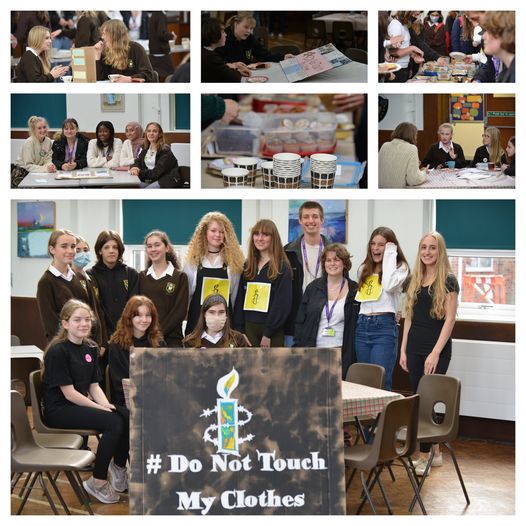 Traditionally, Afghan woman's clothing is colourful and bright - the total opposite to what the Taliban order.

The current Amnesty International campaign focuses on the hashtag #donottouchmyclothes - representing the fact that Women lack free will to wear what they want under Taliban restrictions, and this is something that must change.

Lara and I have been leading the Amnesty group at school on Tuesday lunchtimes with members from various year groups - at the moment we have around 15 members.

Lately we have been talking as a group, raising awareness and using art and symbols to create posters which have been displayed around the school and at our Amnestea Event last week.

The Amnestea event was a tea + cake sale in which we encouraged students to donate and sit with a cup of tea and read and talk about the current issues in order to raise awareness of what is happening in Afghanistan.

We raised £457.83 at our Amnestea event which is to be shared between Amnesty’s campaign and a second charity focusing on women in Afghanistan.'