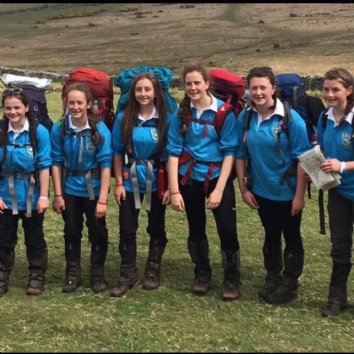 Massive congratulations to all the teams!

Ten Tors 2017
I am pleased to report that all six teams from our training group are back home with no injuries or drop outs. Massive congratulations to all the teams!

The Ten Tors teams have successfully completed the Annual Challenge again this year. After months of training on Dartmoor in the rain, fog and even snow, the teams got the chance to put their training to the test. We worked with Coombe Dean School, Plympton Academy, and Plymouth High School for Girls. Between us we had 6 teams out, 3 to compete in the 35 mile challenge and 3 to compete in the 45 mile challenge. The 35 mile teams went up on the Friday to face the scrutineering of their kit and then the afternoon continued with a safety briefing followed by planning their route for the weekend walk. After school the 45 teams came up to join the camp and after dinner the final touches were added to the route cards, then off to bed for some sleep before the 04.30 wakeup call.

The following day all the teams had breakfast then headed up to the start ready to set off as the canon fired at 07.00. Parents/carers were then able to follow the progress of the teams on-line. The next day the teams were up and off ready for the first check in at 06.00 and headed back via their remaining tors towards Okehampton for the finish.

Our first team back was the DHSG 45 milers, Rachel Hope, Rachel Adkins, Alice Burdett, Megan Miller and Jazz Cope, ably lead by Mia Flannagan, and they crossed the line at 12.03. They were closely followed at 12.35 by the DHSG 35 mile team, consisting of Jules Barron Robinson, Bea Richardson, Mary Oshinyemi, Olivia Ketley, Ellie Rowland and Louise Searle. The Coombe Dean 35 mile team came in at 12.43, then Coombe Dean 45 milers who arrived at 14.17. They were closely followed by the Plympton Academy team at 14.29. The Plympton Academy team was made up of Alexandra Sutton, Georgie Clarke, Mair Owen, Tara Hart, Evie Kettlewell and Lois Fileman. Our final team arrived at 16.32. This team was made up of 2 Coombe Dean Students, one from Plymouth High, another from Plympton Academy and two Devonport High School for Girls students, Annabel Pearce and Lucy Cornish. Bringing this team together as a unit was no mean feat as the students only got to know each other during the training season. A big thank you also needs to go to Amelia O’Grady and Leah Johns who came up to support as reserves. All teams finished strongly and received their medals and certificates and I feel privileged to have had the opportunity to have played a part in the training that saw these teams achieve their goals. All students really impressed me with their determination to complete this challenge and the team spirit was phenomenal. A massive well done to all those who took part in the training this year. I hope they are already beginning to think about next year as the training team is already starting their planning.